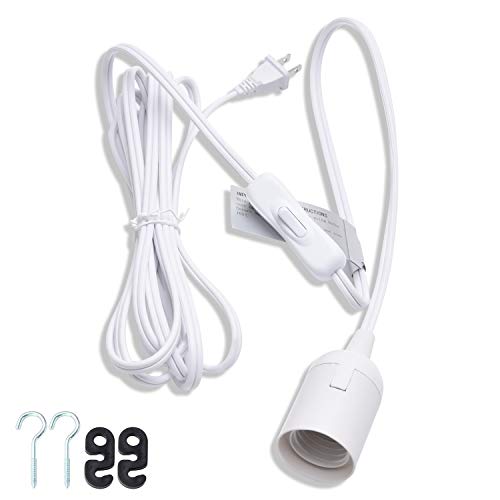 SUITABLE LENGTH: Amazing high quality with an easy access for on/off button. The length between on/off button and the E26/27 socket is 19.7 inches. Max power is 360 Wattage, working voltage range: 110V-250V. If you need the switch with 15ft or 20ft, please search asin: B078W48D7K, B078W3NL4BUL PRODUCT: All parts of this product are strictly UL approval. With 2-Prong US AC Power Plug. Works with any type of E26/E27 bulb perfectly. In order to avoid the life of the product being shortened under long-time high-power work, We recommend that customers try to avoid using high-wattage bulbs in sealed lamps.CONVENIENT USAGE: Lightweight and easy for anyone to use. We prepare 2 ceiling hooks and 2 cord hooks for hanging. It's simple to install the bulb without any tools. Control switch that you can turn on and off easily.BEST LIGHT FOR YOUR PLACE: Can be used anywhere you want, perfect for lighting up bedroom, living room, kitchen, studio, etc. Ideal for places that you are inconvenient to close to the power source.100% SATISFACTION GUARANTEE: We strive to provide each customer with the highest standard of customer service to ensure you have a pleasant shopping experience. If you have any issues, inquiries or need assistance, please feel free to contact us directly. 30-day money-back guarantee for any reason, 12-month warranty for quality-related issues.
Check price on Amazon

Then just grab a 12V car, boat, lawn tractor battery. Use an led bulb for less power draw. You'll have to recharge every so often (the battery capacity will determine how often).

Also you can add a solar charger so you never have to charge it. http://www.harborfreight.com/15-watt-solar-battery-charger-68692.html

They shouldn't be selling home furnishings, they should be teaching classes on how to grow balls the size of grapefruit.

Okay so I had an extra minifridge laying around, which is where the plan started.

[a dehumidifier (as I also use the chamber for curing meats sometimes)]
(https://www.amazon.com/gp/product/B07CPQMMR2/ref=ppx_yo_dt_b_search_asin_title?ie=UTF8&amp;amp;psc=1)

and then also a regular incandescent lightbulb on a lantern cord

So how it works is the temperature and humidity controllers each have two power sockets, one that activates when the temp/humidity goes lower than what you set it to, and the other when it gets higher.

So I plug the fridge itself in to the high temp socket,

the lightbulb in to the low temp socket,

the humidifier in to the low humidity socket,

and the dehumidifier in to the high humidity socket

The humidity controllers sit on the bottom of the fridge, and the lightbulb is hung from the top.

I then took off the door of the fridge and ran all the wires between the door and the body, and then put the door back on. All the wires are hidden in a box sitting on top of the fridge, and the Inkbird control units sit next to it.

Cut off the plastic domes

Get a 7 way socket splitter

Assemble it all and it will look like this http://imgur.com/gallery/1eZwTCt

If your lucky you can get 1 gram per watt. So 63 grams. I'd advise against the foil and use mylar. You can get it at walmart for a dollar sold as emergency blankets. The reason is foil is a very poor reflector but good at reflecting heat. Which you dont want.

You can use the cardboard box but I would find a plastic tote to use or even a 5 gallon bucket.

Use the lucas formula which is 6ml of micro and 9ml of bloom. From seed to harvest.

If you mean to add a switch to a lamp that doesn't have one, something like this is safer than cutting the cord: http://www.amazon.com/Prime-Wire-Cable-EC870615-15-Foot/dp/B006G69Z44

If you need a lamp socket too: http://www.amazon.com/JACKYLED-Extension-Hanging-Lantern-Lighting/dp/B016MDPWL0

I used that once. Works well. Be sure to use a led bulb

I got three Philips 23W CFLs (6500K) in a 2'Wx1'Dx1'H box. The light is hanging from a 3-way splitter and a cable. By the way, the 3-way splitter barely fits in the space once all CFLs are in place. If I were to redo the setup, I would rather get two 2-way splitters and one more cable. I don't like how my CFLs touch the walls now, but it shouldn't be a problem.

The inner walls of the box are covered with Mylar. For reflective Mylar sheets, I recommend a cheap emergency blanket instead of hydroponics stuff. They work all the same, and these shouldn't cost more than a few dollars. My box also has a Mylar flap to cover about half of the front opening of the box. I can close it all the way, but won't keep it covered more than a couple hours at a time due to the box heating up. It's probably fine, the flap is flabby and still lets plenty of air in and out, but I'm just being extra careful. I have a cheap USB fan directed at the lights to help cool them down a bit. The air above the lights gets pretty warm without a fan.

The whole setup is on a timer for 14 hours a day, just like my previous setup. Let's see if the pretty stress colors on my Echeveria comes back in a month or so.

+72 hours later after the "downloading" status appeared, the "Upgrade" green box finally appeared at the top of the software update screen.

All upgrading finished soon after that.

Exception: The Hue BR30 flood lights that turn only only via motion sensor. I guess these lights will never be upgraded. Or, until I find someone willing to make motion under them for 72 hours straight :-). Or, until I hire an electrician or someone else with an extra tall ladder to get them down. (not me! - I don't climb ladders bigger than closet shelf height since I saw my friend's life changed by a 10' ladder accident)

2 Morals of the story:

I bought something similar to this https://smile.amazon.com/JACKYLED-Extension-Hanging-Lantern-2-Prong/dp/B016MDPWL0/ref=sr_1_8?ie=UTF8&amp;amp;qid=1478705405&amp;amp;sr=8-8&amp;amp;keywords=light+plug. Then I cut the plug off, ran it through the fixtures pipes, and wired it to the electrical in the wall.

Cut off the plastic domes

Get a 7 way socket splitter

Assemble it all and it will look like this http://imgur.com/gallery/1eZwTCt

If your lucky you can get 1 gram per watt. So 63 grams. I'd advise against the foil and use mylar. You can get it at walmart for a dollar sold as emergency blankets. The reason is foil is a very poor reflector but good at reflecting heat. Which you dont want.

You can use the cardboard box but I would find a plastic tote to use or even a 5 gallon bucket.

Use the lucas formula which is 6ml of micro and 9ml of bloom. From seed to harvest.

Nope, this bulb fits any standard outlet. Something like this would work: https://www.amazon.com/JACKYLED-Extension-Hanging-Lantern-Lighting/dp/B016MDPWL0/ref=mp_s_a_1_6?ie=UTF8&amp;amp;qid=1539843203&amp;amp;sr=8-6&amp;amp;pi=AC_SX236_SY340_QL65&amp;amp;keywords=socket+light&amp;amp;dpPl=1&amp;amp;dpID=41LHMX9N9CL&amp;amp;ref=plSrch